Mira started life back in late 2016 as my first foray back to Intel in… 17 years. Here’s a rough timeline:

Then in 2016, rather than waiting for the first generation of Ryzen processors, I decided to jump to the Intel X99 platform with the i7-5820K. Now in 2020, it’s back to AMD with the 3rd generation Ryzen.

For immediate reference, here are the prior specifications:

The rest of the system is remaining the same. I’m not upgrading the storage or graphics card since… I just don’t feel the need to do so right now.

For some reason the mainboard decided to give up the ghost. It wouldn’t detect the RAM, continually illuminating the DRAM_LED, and plugging in the USB port for the TUF Detective app on my phone wouldn’t connect. So the board is, in effect, dead. Might try for a resurrection later. We’ll see.

And for some reason, listings for it are several hundred dollars, used: 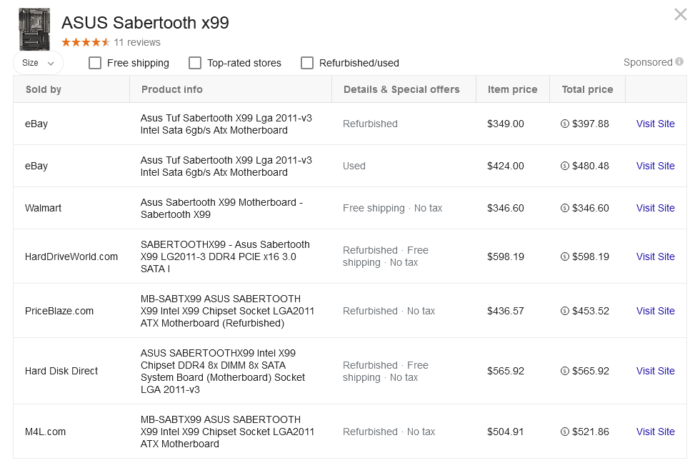 Seriously? Over 400 USD for a refurbished desktop mainboard? That’s more than I paid for mine when I bought it. New. Yeah, no thanks.

So how far up the Ryzen tiers did I go?

I initially considered a B450 mainboard, and reserved one with my local Micro Center – specifically the ASRock B450 PRO4. But after doing a little more research into the board, I discovered that I’d need a little more headroom than what the B450 could provide.

Along with the GTX 1070, I also have a Mellanox 10GbE card, Samsung 950 PRO NVMe SSD, plus four (4) 1TB HDDs in RAID-0 that I use for additional storage. With the B450 board I was considering, that’s basically running right up against the limits of what that can handle.

Overall it was the better way to go for my setup, and it’ll be the way to go when I upgrade Amethyst later this year. Most, though, would likely be happy with a B450 mainboard. If you have just a graphics card and M.2 SSD, go with the B450 chipset.

Note on ASUS X470 and B450 mainboards: if the box has a red dot near the UPC, it’s BIOS has already been updated to support the 3xxx-series Ryzen processors. Learned that when I bought mine at Micro Center.

Thankfully most waterblocks are made to be cross compatible. They have coldplates large enough for most desktop processors. So the only consideration is the mounting hardware. With most blocks, the manufacturers make available the mounting hardware separate from the block. This allows you to switch platforms without having to buy a whole new block.

So for my Watercool Heatkiller IV, I just needed to buy the AM4 mounting hardware – part no. 14072 – which was thankfully available through Performance PCs. 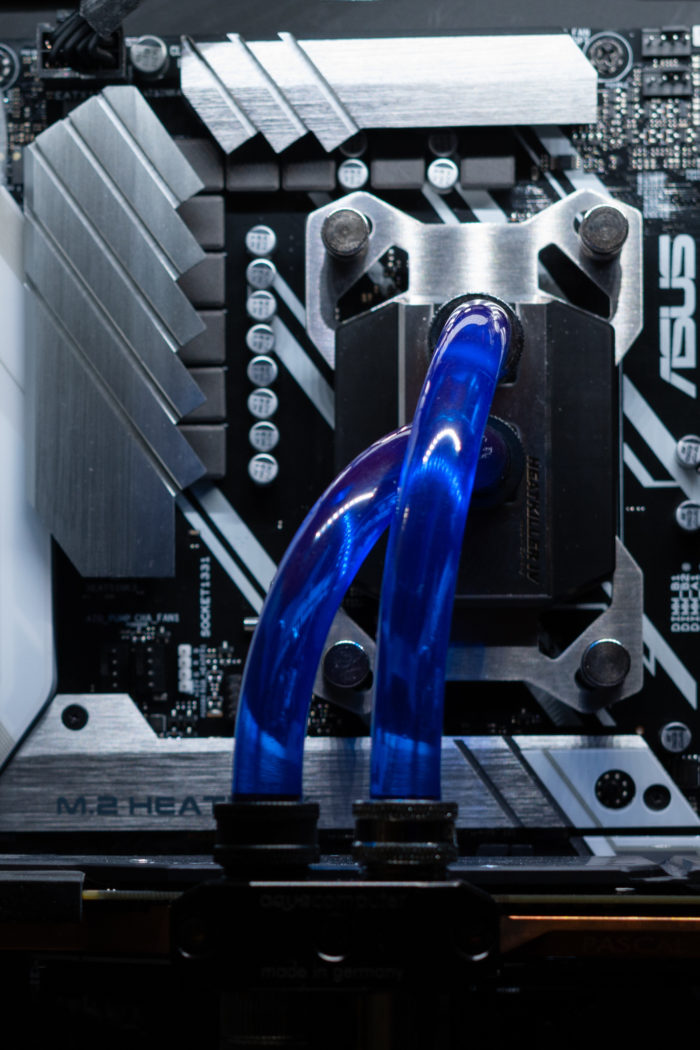 Unfortunately, though, I couldn’t keep the same block alignment I had with the X99 processor, since AMD’s mount isn’t square. This also meant I needed to replace the tubing. I didn’t have any clear tubing left over, and I didn’t want to buy a 10-foot box of it when I only need about 18″. But I did still have some UV Blue tubing left over from the maintenance on Desert Sapphire last year, so I opted to give my system a little more color.

The last benchmarks I have recorded are from two (2) years ago. My 5820k was running at 4.1GHz at that time, and I had about the same overclock on the GTX 1070 as I still have now.

Here are the benchmarks for the Ryzen 7 3700X with a boost to only 3.8GHz on the stock Wraith cooler:

Okay that’s a little interesting. Let’s see how this fares with an overclock.

And as you can expect, the benchmarks weren’t all that impressive compared to stock.

Temperatures were also very impressive. Now I have an overkill and somewhat unusual water cooling setup. But that setup also meant it was nearly as easy swapping out the X99 for the X470 as if it were on air. Under load with OCCT Small Data Set, the CPU maxed out and held at 60C, reaching toward 61C but not quite getting there.

The 5820k would max out in the low to mid-80s. But I also discovered the IHS had a bow to it similar to what JayzTwoCents discovered about one of his processors that he lapped before delidding:

The risk of that defect is higher with soldered CPUs, since solder solidifies when it cools, giving no play should it be applied too thick.

Had the processor not had that defect in the IHS, it likely would’ve been able to run much cooler than it was. I planned to lap my 5820k about the time the X99 board decided to give up the ghost.

And then there’s gem from BuildZoid:

Summarizing the changes relevant to my system:

And did I see any improvement? Nope.

Setting the multiplier back to “Auto” and enabling these settings in all places where you can configure the Precision Boost Overdrive (of which there are THREE), the processor was able to automatically boost to 4.1GHz across all cores. But it also drew significantly more power and raised the core temperature by 20C. So a lot more heat, but no more performance.

An article on Asus’s Edge Up mentioned the AI Suite as a means of also tuning the CPU. And since that tweaked the voltage along with the multiplier, it was able to pull the CPU up to 4.3GHz. How did scores compare?

And… not much of a difference to benchmarks. This was enough to convince me to just… stick with the 41x multiplier. Especially since the AI Suite also pushed the CPU temperatures up well over 70C due to the added voltage. So not much of a performance gain, but a jump in temperatures and power consumption.

So to summarize, I went from X99 and 6 cores/12 threads to X470 and 8 cores/16 threads. The new processor runs on less power and produces less heat, yet performs about the same or better.

Glad to see AMD is back. And I’m glad to be going back to AMD.

So it was good seeing those scores actually improve with a better overclock.