Tuning the autofocus is one of the major benefits to owning a Sigma lens. My camera is a D7200, and it allows for AF fine tuning in the body. Calibrating the lens to the camera is important for sharp and accurate auto-focus.

The reason for this is simple: there are two autofocus sensors on your DSLR. One is used by the viewfinder, and the other is your camera’s sensor. (This is where mirrorless cameras have the obvious advantage.) Fine tuning the autofocus on cameras that allow it is about bringing those two sensors as close to parity as possible. If the viewfinder sensor isn’t calibrated to match the camera sensor, you’ll end up with pictures that may look sharp enough, if they look sharp at all, but not as sharp as they could be.

So how do you bring them into parity?

The “DotTune” method I’ve found to be the fastest method for doing this. But in my initial attempt with it, I was having a hell of a time and getting some wild values. Why? In large part because I was actually trying to measure the distance to target using a tape measure to the sensor-plane indicator on the camera body. And, it turns out, the distance scale on the lens isn’t… entirely accurate. (Insert ID4 meme.)

So while DotTune works great, it doesn’t work when you need to rely on a specific focus distance according to the lens. Instead, the method requires some… tuning. Specifically to step 2 of the process: “Establish critical focus in Live View”.

Remember that tuning your autofocus is about bringing your viewfinder’s sensor into parity with the camera’s main sensor. Why this has to happen with each lens is beyond me, and why Sigma and Tamron’s lenses require it at multiple points on the lens is also beyond me, but…. moving on. Live View let’s you determine at what point the camera says you’re in focus for a particular distance. So when establishing critical focus using Live View, you need to check the distance scale on the lens. 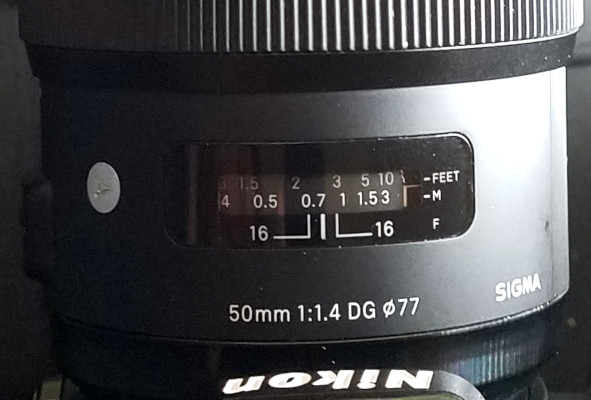 Then it’s just a matter of adjusting the distance, closer or farther back, engaging the autofocus each time, until the the distance marker lines up to what you need. In the above picture, I was lining up for 0.7m. As you can see, I’m a little too far back, so I needed to steadily move the camera closer to the target until the autofocus set the lens to about as exactly on 0.7m as I could get.

Note: when you adjust the camera distance, make sure to move the lens focus ring to infinity, and if you’re adjusting for infinity, move it to <1m. This way you’ll know that you’re at the right distance when you engage the autofocus in Live View. 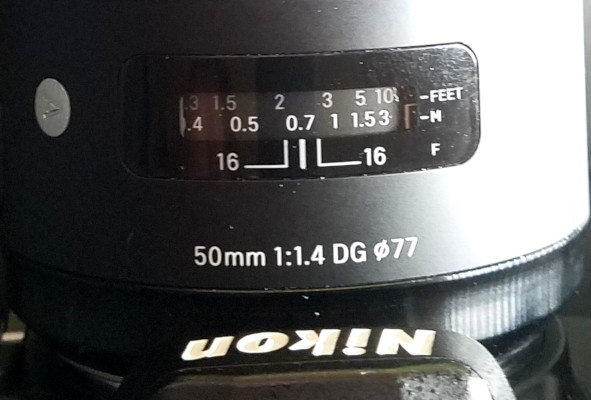 Since this was now “critical focus” for that focus distance, the rest of the DotTune steps followed from here, using the “AF fine tune” to determine the tuning value for this focus distance.

After I confirmed values for the needed focus distances (not really worrying about infinity at this moment), I programmed the lens using the Sigma software with the determined values and delete the “AF fine tune” value saved for this lens.

Then it was a matter of repeating steps 2 to 4 to confirm the programmed values and adjust accordingly, dialing in the values if needed until a half-press of the shutter on step 4 produces an instant, solid dot at each focus distance.

One thing to note, obviously, is that Sigma’s numbers for tuning and Nikon/Canon’s numbers aren’t equivalent, so the numbers from the camera should only be used as a starting point for dialing in further. But it should get you in the ballpark. In my instance, the numbers for 0.4m and 0.7m were close enough that the half-press gave an instant, solid dot confirming the adjustment. Doesn’t mean that’s the optimal setting, and I could dial it in further if I really wanted. However the 1.5m number I initially set (+15) was too high according to the viewfinder sensor, so I pulled it down to the number you see above and that worked. 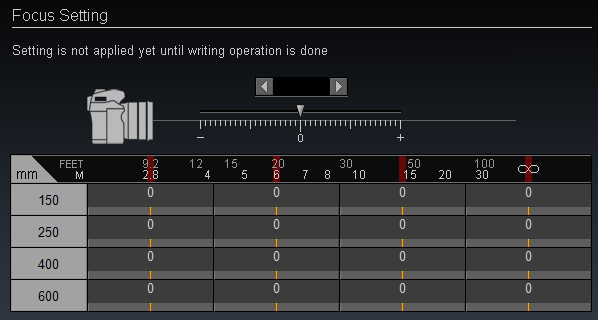