Another Saturday was upon us! Time to get to work!

The drain port was my first move. I knew I needed to cut a hole in the bottom for it, but how was the question. I tried Dremel blades at first and they didn’t do jack on that mark. So I paid the $20 for a step bit, which did the job nicely, though it left nice little aluminum shards all over the place, but that’s what a vacuum is for. The step bit I bought only goes up to 1/2″, which is just under the 14mm that would allow a clean pass-through. But I was able to thread the fitting through till I could secure it with the nut on the other side. 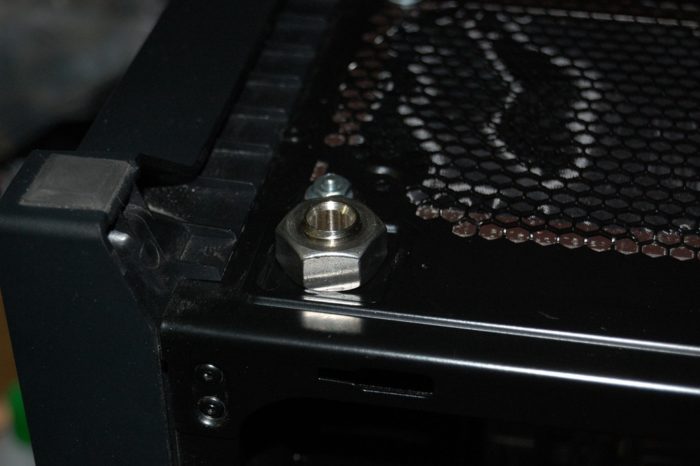 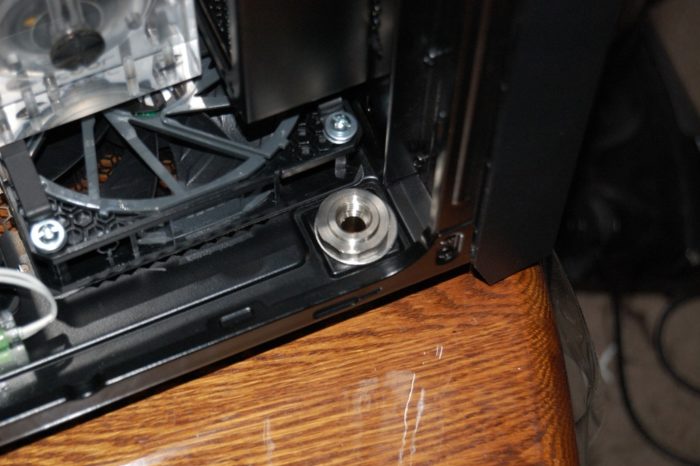 Earlier in the day I visited Microcenter and decided to go with the Primochill “T” fitting. The weight of the Swiftech manifold is what turned me away from it. The next stop was to Home Depot to get more copper tubing. I only bought the 10-foot roll, so hopefully that’ll be all I need… And later in the evening while my wife was at work, I made sure to pick up the chocolate. I needed milk anyway, so it was basically just another stop.

My cat didn’t seem to care, though. I may change that out for copper tubing between the T-fitting and the valve. I have enough fittings, but I’m not sure if it’s too tight a turn for my tubing bender. We’ll see.

As I mentioned earlier this means that draining the loop is going to be about the same as draining a car: put a container underneath, open the valve, and just let it flow out. Good thing that only has to be done every couple years.

Sunday dawned with a thunderstorm, a latte, and a black cat who seemed to be complaining there weren’t any sunbeams coming in through the balcony door. Just kidding. While I was working on my wife’s build, the cat was parked someplace a little more vital… Ah the joys of owning cats…

With my wife still sleeping, I began with the cable management. I wanted to put off tearing apart her computer till I no longer could so she has the least amount of downtime – even though this whole process was still going to take several days to complete, mainly because I do have a regular job during the week.

The bigger reason it will take several days is the fact I’m going to be bending copper tubing for this build. And while copper is a little more forgiving than acrylic and PETG, I have to straighten what comes off the roll first. Home Depot does sell straight sections of soft copper tubing, but only for 3/8″ OD, and it’s $4 for a 24″ length. If I wanted a 1/2″ OD, I’d be paying for copper type L pipe. It’s less expensive than copper tubing, but more difficult to work with. Bending requires a conduit bender or hydraulic tubing bender, making tight radii out of the question, so I’d have to resort to fittings, the easiest and lightest of which would require solder, flux and a blowtorch.

And I think my wife would rather not have flames near her machine again.

With the cable management, I started with plugging the fans into the fan controller and tying up as much of the cabling as possible into some 3M Command cable clips I’d previously installed into her case when I did the initial power supply upgrade. Zip ties helped keep everything together within the clips. Speaking of power supply, getting the power supply cables installed was the next step – I wanted them in before I started installing components just to make things a little easier. I also installed the Koolance temperature sensor in one of the ports on what will be the outflow of the radiator. 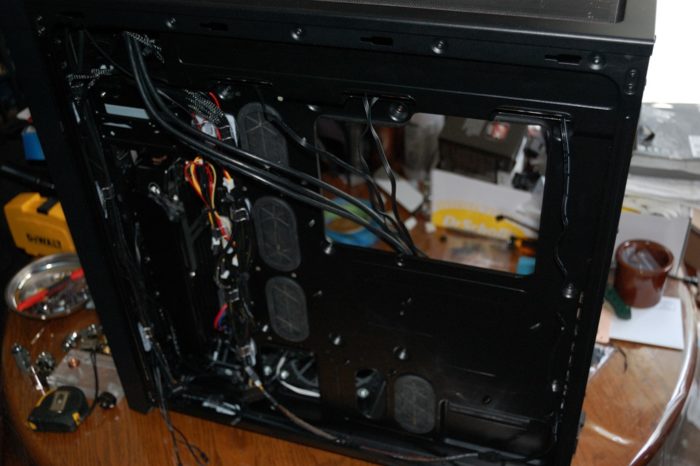 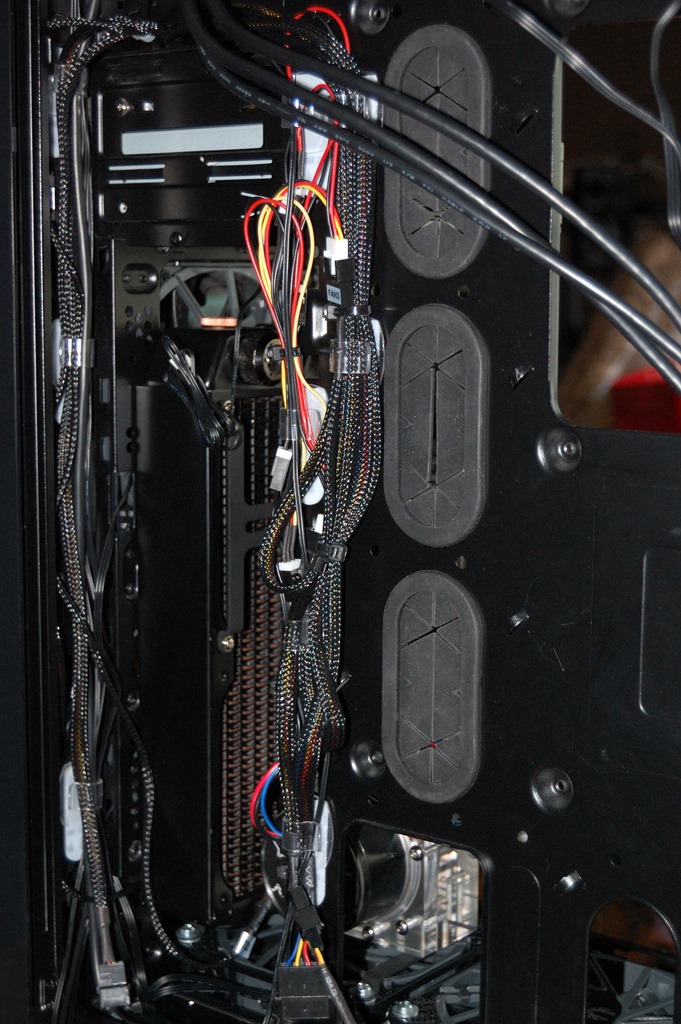 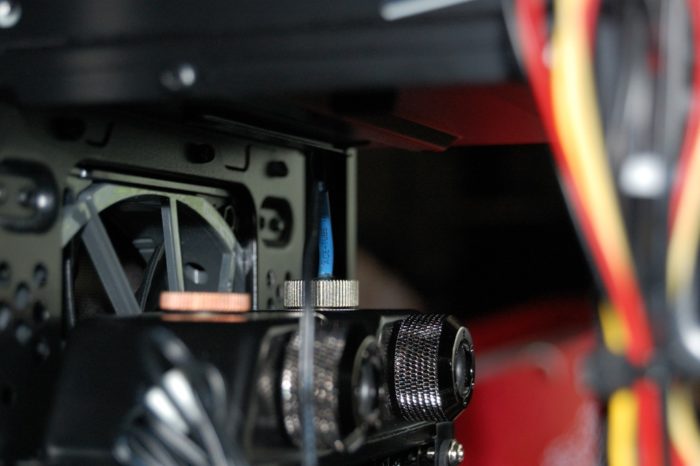 Then I turned my attention to placing the inverters for the CCFLs. One is sitting conveniently behind the mainboard tray, while the other is behind the bottom 120mm fan closest to the power supply, which will be behind the hard drive mount when that is reinstalled, meaning the inverter will be completely hidden from sight. Both are held in place by 3M VHB tape. 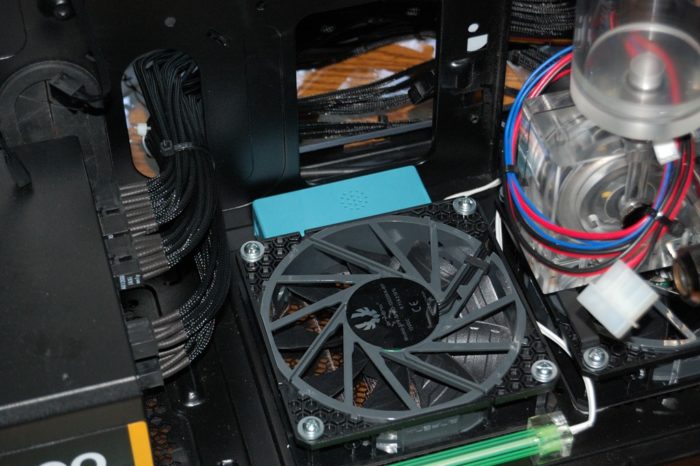 The intent is to run these without the switch, so for that I needed to modify the power cables.

Simple mod, really. Snip the red and yellow wires first about halfway between the switch and Molex power connector. This should give you red and white wires that are more or less the same length. Then strip the ends and join them together. I just hooked the ends around each other and secured with electrical tape – it looks crude but they’ll be behind the mainboard tray and out of sight anyway. If these were going to be visible in any way, I would’ve tried to find a better way to do this. And that’s basically it for this iteration. My wife wants the least impact to her on this build, so she asked that I wait till Monday night to start migrating components and building out the loop since she’ll be at work. It also gives me a little more time to plan out things and make sure I’m settled on what I’ll be doing for the loop.

First order of business will be getting the water block on the CPU and getting the mainboard positioned. I need that to take some measurements and see how the CPU block will appear in relation to the upper radiator. I may also try to connect them up. I also want to get the graphics cards done tomorrow, but I’ll see how far I can get as the teardown alone is going to take probably close to two hours.