A friend of mine recently tagged me on Facebook to ask my opinion on this. Below is my response with some enhancements and additions. 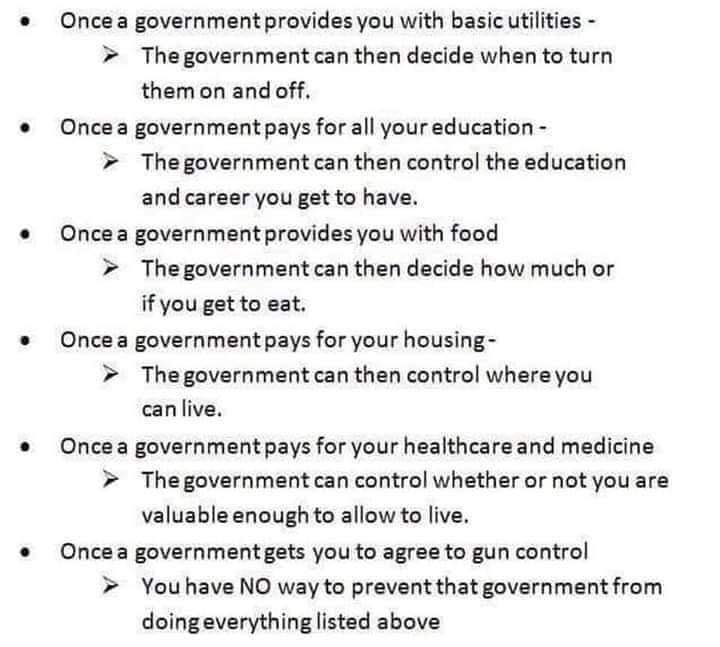 “Once government provides you with basic utilities -“

I live in a county where the county provides the water and electricity. Right now they can’t cut off utilities for anything except failure to pay. But there is nothing except diligence by voters stopping them from instituting other… conditions on your utilities. It’s one of the reasons off-grid power (solar panels with battery backups) is growing in popularity in places where counties control the basic utilities.

“Once the government pays for all your education -“

We already see this to an extent. With the education, not yet the career. The government controls the curriculum. We saw this with the introduction of “common core”, which was introduced by government fiat without any kind of say by the teachers and parents, and in some instances against any protest.

Which it’s rather interesting how the left pushes back against the right’s badly-veiled attempts to get creationism in public schools, yet largely didn’t push back against “common core” when it was introduced… while Obama was in office.

Until they saw what that meant.

At which point it was largely too late to do anything.

“Once government provides you with food -“

All you have to do is look at the SNAP program. Plus we had rationing by government fiat “for the war effort” during the Second World War. Many New Deal programs also instituted massive controls over the American economy for the explicit purpose of bringing the Great Depression to an end.

Except there is consensus among economists that the New Deal programs prolonged the Great Depression. That’s why when those programs were ended after the War, we had massive prosperity going into the 1950s after a short stint with another depression immediately after the war. Yes, contrary to what people have been led to believe, the Second World War didn’t actually end the Great Depression. It just pushed it to the side.

“Once the government pays for your housing -“

Section 8 housing already falls within this.

When you have a choice over where to live, landlords will compete for your money. Most renters can get up and leave most any month, so a lot of landlords will do what they can to keep you there. Because vacant apartments and homes are cash sinks. The landlord is responsible for utilities and upkeep when no one is living there, and they have no income from rent to offset the mortgage, property insurance, and property taxes.

But everything I’ve read about Section 8 housing also shows it to be “bottom of the barrel” in terms of quality, because the complex knows that those who live there largely don’t have any other choice. So there’s no need to compete with other Section 8 complexes for residents.

And that’s largely the crux of giving the government so much control over our lives: it takes away our choices. And without choices, you don’t really have any freedom.

“Once a government pays for your healthcare and medicine -“

And this is happening in countries with universal health care. Proponents of “health care as a right” don’t want to talk about that reality because they seem to think they can tax the rich enough that everyone else will be prosperous and everyone will get whatever care they need regardless of the cost.

Which shows they don’t understand wealth as a concept, nor do they understand the basic realities of economics.

There are numerous horror stories about universal health care. Much the same horror stories with private health insurance – grandma not getting her medicine, kind of stuff – only it’s patients being left to die in hospitals so the beds will be freed up, surgeries being denied or massively delayed, and other forms of rationing such as wait lists to see a doctor, and so on. At least in the United States, you’ll get care if you need it, even if it’s at an emergency room – where I ended up back in March (with the premium to go with it) when I had that dental abscess flare into massive swelling in my jaw and cheek. And there are charities and foundations and other forms of financial aid to help with the cost. And, yes, crowdfunding as well.

Whatever care is *necessary* to your wellbeing, you can get it in the US, and the hospitals and clinics will help you figure out how to cover the cost later. If you need prescription meds and can’t afford it, the manufacturers have programs where you can get your medicine at reduced or no out-of-pocket cost, either through a local pharmacy or directly from them (with some exceptions as required by law, e.g. opiates).

One thing to bear in mind with so-called “universal” health care and “health care as a right”: he who pays the piper calls the tune. And while many would consider the idea the government should decide who gets to continue living is far-fetched, it also isn’t new.

And I think it would be a good thing to make everybody come before a properly-appointed board – just as he might come before the income tax commissioners – and, say, every 5 years or every 7 years, just put him there and say, “Sir or Madam, now will you be kind enough to justify your existence?”

If you can’t justify your existence, if you’re not pulling your weight in the social boat, if you’re not producing as much as you consume, or perhaps a little more, then, clearly, we cannot use the big organization of our society for the purpose of keeping you alive because your life does not benefit us and it can’t be of very much use to yourself.

“Once a government gets you to agree to gun control -“

Democracy is not freedom. Democracy is two wolves and a lamb voting on what to eat for lunch. Freedom comes from the recognition of certain rights which may not be taken, not even by a 99% vote.

Majority rule will only work if you’re considering individual rights. You can’t have five wolves and one sheep vote on what they want to have for supper.

While democracy is five wolves and a sheep voting on what to have for dinner, a well-armed sheep can contest that vote. Whether the sheep prevails is immaterial. What matters is whether the sheep has the ability to do so. Not having that ability means a 0% chance of prevailing. And it seems that a lot of people on the left want everyone else (who doesn’t agree with them lock step) left without the ability to contest.

With self defense, a firearm is the ultimate equalizer. It can stop a confrontation that is escalating from escalating further. It gives a 125lb, 5′-tall woman power to defend herself against a 6′-tall, 250lb man. It gives an older man the ability to prevail against a younger, stronger, more agile person who initiated a violent confrontation.

Rifles gave the Colonists the power to fight off what was then perceived as the most powerful military in the world. Which is why the first task of that military, which directly led to the Revolution, was seizing arms from those colonists.

Until the late 19th century in the United States, the People had the same firepower as the government. There was no distinction between civilian and military weaponry “meant for the battlefield”. It was only going into the 20th century that there started to be a power disparity in that regard that only grew from there. Even in the 19th century, private merchant vessels had cannons to ward off pirates. Today… not even cruise liners have armed security, and most who sail their own yachts also don’t keep arms onboard. Granted the saltwater air over the open ocean would wreak havoc on the steel in most firearms, but there are ways to combat that. After all they needed that kind of protection for the cannons and cannonballs.

Now the First and Second World Wars drove a massive arms race in which the United States ultimately won the checkered flag. But in the United States while war drove advancements in arms, those advancements eventually made it to private hands. And with personal arms (rifles, pistols, etc.), this has still held true. But not with everything else.

Instead the only thing that would keep the “everything else” from being turned on the People of the United States are the military officers in charge of that “everything else”. Officers who take an oath to the Constitution of the United States, not the government. But as we saw during the Second World War, even military officers aren’t immune from the kind of brainwashing that could push them to turn their firepower on the people they are supposed to be defending from tyranny, not installing tyranny over.