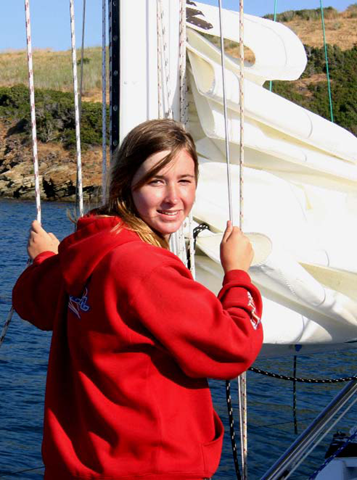 Abigail “Abby” Sunderland attempted a feat of which most most everyone in the world could only dream. Sailing around the world is no small matter. Sailing into the open ocean period requires you to keep your wits about you as the ocean can be unpredictable.

But much of the criticism of her attempts to circle the globe have been lobbed not just at Abby, who is only 16 years old, but also at Abby’s parents, and this, I feel, is unfair. Abby made the decision to attempt this voyage, and I feel she would not have made this decision if she felt she was not experienced and able enough for the task. Again, circling the globe is no small feat.

Abby is a minor, yes, but she has shown that she is no ordinary teenager. She thought and planned this out very thoroughly, allegedly over the course of several years, and likely also with the help of her brother, Zac, who is the first person to circumnavigate the globe as a minor.

At age 16, if she wasn’t attempting to sail around the world, what else would she be doing? Think for a moment about what a typical teenager is doing in this country? It’s June, school is out likely all of the United States right now. Some teenagers will have jobs, others will be doing near-meaningless things with their time until school starts again in August or September.

Abby was having arguably the greatest adventure of her young life.

Her parents could have stopped her, but everyone knew of the risks involved and felt that she could handle it, and Abby’s family supported her. The ocean can be unpredictable, but so is life, and having the support of friends and family can help you through some of the toughest challenges you’ll face.

Those who feel the need to criticize Abby or her parents about this sailing attempt really need to take a firm look at themselves and the teenagers around them. Teenagers today have life very easy, and I’ve seen many demand it to be easier. They have few needs but many wants they mistake for needs. Few any more take up challenges that place them under any kind of mental or physical pressure, including the pressures of basic survival in some of the harshest areas of the planet.

For Abby to complete her circumnavigation would have required not only the skill and experience gained in her several years of training, but also a lot of luck that the weather and ocean would cooperate along her route of travel. Unfortunately the latter ran out.

If this voyage was haphazardly planned on a whim, as if Abby woke up one morning and said “I think I’ll sail around the world” and just jumped in her boat and set off, then criticisms would certainly be warranted and criminal charges would likely be demanded by the general public. But that is not what happened.

They knew of the possibility Abby would run into dangerous waters, possibly causing her vessel to become disabled or worse. But Abby was trained and experienced, and that is evident in how she responded when the ocean disabled her vessel at approximately 40° 48’S, 74° 58’E.

Abby knew what she was doing, and she was aware of the risks and dangers. So was her family.

But if you feel the need or desire to lob criticisms at Abby or her family for allowing her to undertake this dangerous voyage, and you are also the parent of a teenager who will likely be spending most of his or her summer texting, surfing the web, and/or playing video games among other relatively unproductive things, then the criticism should really be going back on you.

Again the criticisms of Abby and her family are undeserved and unfair. Leave them be and at least be thankful that Abby was found alive and reasonably safe.

Since I keep getting inquiries for some reason…