Currently one of the hot topics floating around the country is the idea of the government stepping in and purchasing all of the student loan debt that is currently outstanding and then just… forgiving it. Setting aside for the moment how many hundreds of billions of dollars that would take, not to mention the credit ruin and tax liability that would cause, putting more than two brain cells into the idea would show how bad of an idea it is.

But yet pictures such as this one permeate the discussions about this idea: 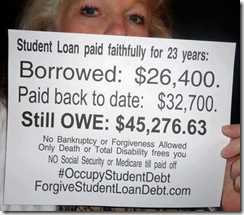 It seems that people would rather have a simple solution instead of hunkering down and tackling a problem the hard way. In the case of debt, the hard way means actually making some adjustments to your lifestyle so you can pay them off rather than complaining about how much you owe.

Let’s do some math here on this particular example.

Across 23 years, she’s paid only $32,700, meaning she’s paid, at most, about $120 a month. And at that pay rate, given the claimed outstanding liability on the loan (I’ll presume it incorporates interest calculated across the remaining period), she will be paying on this loan for about another 30 years, meaning she’ll have paid $120 a month on this loan for about 54 years when she pays it off, and will have paid about triple what she borrowed. Her interest rate across the life of the loan is about 5%, which is not an atypical interest rate on a loan.

So she initially borrowed $26,400, and will be taking over 50 years to pay it off at an interest rate of 5% because she’s paying only $120 a month, and will pay about $78,000 across the life of the loan… Perhaps this is just me, but I think her financial priorities need to be straightened out.

If you do the math on any 30-year mortgage, you’ll find that the end total paid back to the bank is typically about 3x what was borrowed. This is why one of the key tenets of paying off debt is to pay it off quickly. You will always pay less overall if you pay off a debt faster.

And nothing stops you from paying more than your typical monthly payment on your loans. If your monthly payment is $150 a month, try to pay $175 or $200 a month and you’ll see your loan disappear a bit quicker. Make higher monthly payments or off-schedule payments when you can. For example if you spent $20 less at the grocery store because you didn’t need as much as you thought, instead of spending that cash on something else, make an extra $20 payment against your loan.

It’s doing little things like that which enabled a friend of mine to pay off a 15-year mortgage in about 4 to 5 years.

But it’s clear that she needs to bump her monthly payment rather than demand that her loan be forgiven. This should be common sense: the only way you will get out of debt faster is to put more of your income and/or assets at your debts. There are stories of students paying off loans similar to the example discussed herein in about the same time as a car loan simply because they do the smart thing and dump their money into their debts.

In other words, they readjust their lives to making paying off their debts a top priority.

Rather than demand your student loans be forgiven or complain about how much you owe, how about instead just figuring out a better way to pay them off. Yeah it might mean you need to give up some luxuries to do it, you might need to make some sacrifices, but that’s just life.

I came across an article a couple days ago which took another look at this presented situation and provided a more grim assessment. In that assessment, it was presumed the $45,276.63 was the current principal balance of the loan, meaning the payments she’d been making across the 23 years she was making them were not and cannot cover even the interest assessed against the principal every month.

If that is the case, she needs to do whatever she can to make some headway on that loan: put more money toward it, sell off assets, cut services so she’s freeing up her income, get another job to get more income, find better employment to get more income, anything.