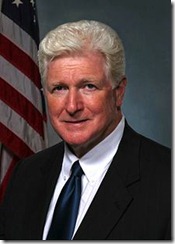 Currently there is no Federal standard regarding concealed carry in the United States. Each State sets their own standard, and most States are “shall issue”, meaning that there is no discretion given to the issuing agency as to whether a person should receive a permit. If they meet the legal qualifications, the issuing agency must issue the permit.

However James Moran seeks to change that.

James Moran (picture at right), Democrat for Virginia’s 8th Congressional District, has introduced a bill into the House of Representatives: the “NRA Members’ Gun Safety Act of 2013“. Talk about a misleading name, but the naming of the bill is part of a political game. Basically by naming the bill in this fashion, Moran has given himself and other Democrats the ability to say that anyone who doesn’t favor his bill isn’t in favor of better gun safety.

Well I guess I’m one of those people, because one provision of the bill caught my attention, and it should yours if you have a concealed carry permit issued by your State. The bill, if passed and signed into law, would add a new section to Title 18 of the United States code to set the national standard as “may issue”:

The part that would set the national standard at “may issue” is (b)(2)(C): “demonstrate good cause for requesting a concealed firearm permit”. Many anti-gun people have sought to restrict concealed carry for numerous reasons, despite the fact that concealed carry has caused an overall decrease in crime, and crime is significantly higher in States without right-to-carry laws.

For those wondering, the phrase “in or affecting interstate or foreign commerce” refers to carrying your weapon in a concealed manner across State lines.

In short, concealed carry works to reduce crime by making the criminals a little more wary of who they’re targeting. This proposed bill by James Moran seeks to neuter concealed carry across the country by making it universally “may issue”.

Now in a Republican-controlled House, I expect this bill won’t see any light beyond committee, but keep an eye on it just in case it does.