Full disclosure: I provide financial support to Singularity Computers through their Patreon.

Singularity Computers is pushing a new case to market called Spectre. Linus Media Group received a custom version of it, and JayzTwoCents is using another custom version in a special build for rapper Post Malone.

Recently Cairns Post published an article featuring Singularity Computers (behind a paywall). So let’s start with the passage from the article that has everyone in an uproar:

“He had some issues in one of his videos, all his followers pointed him in our direction because we had the solution,” Mr Meyer said.

“He dropped us an email, telling us every second comment, out of 10,000 comments were telling him we could help him.

“It is a huge opportunity for us and the exposure is great. Post Malone, even though he has no clue about computers, it is a very important deal.”

Sven wasn’t talking about Post Malone. He was actually talking about JayzTwoCents. The mention of Post Malone at the end of the passage certainly provides the allusion, however, that Singularity Computers is trying to seize credit for the Post Malone project.

And the reaction to this has been far beyond reasonable.

The response they are receiving when the allusion of such was given by a local newspaper is probably a few magnitudes lighter than what they would’ve actually received had they actually tried to take credit for it. Which means the allusion of them seizing credit falls on the journalist who wrote the article. Who obviously didn’t do her due diligence, as I can readily demonstrate.

Back on December 13, 2017, JayzTwoCents published a video showcasing the start of a new personal build:

At the end of the video, he’s trying to think of a good way to mount the pump and reservoir to the front radiator. In the comments to this video, a lot of people recommended Singularity Computers. About two weeks later, JayzTwoCents posted a video continuing the build, and basically saying he got the hint:

Or to again quote Sven from the article: “He [JayzTwoCents] had some issues in one of his videos, and his followers pointed him in our direction because we had the solution.”

But I highly doubt that Sven said the Singularity Computers channel had attracted 1 million followers. He may have been, again, referring to JayzTwoCents, and the statement was taken out of context.

So how did the confusion occur?

This is speculation, but I feel it’s a combination of a need to trim the article without proper diligence to make sure everything was still accurate. And this is apparent given the picture of the article that Daniel shared on his website and linked across social media (though all social media links have since been removed): 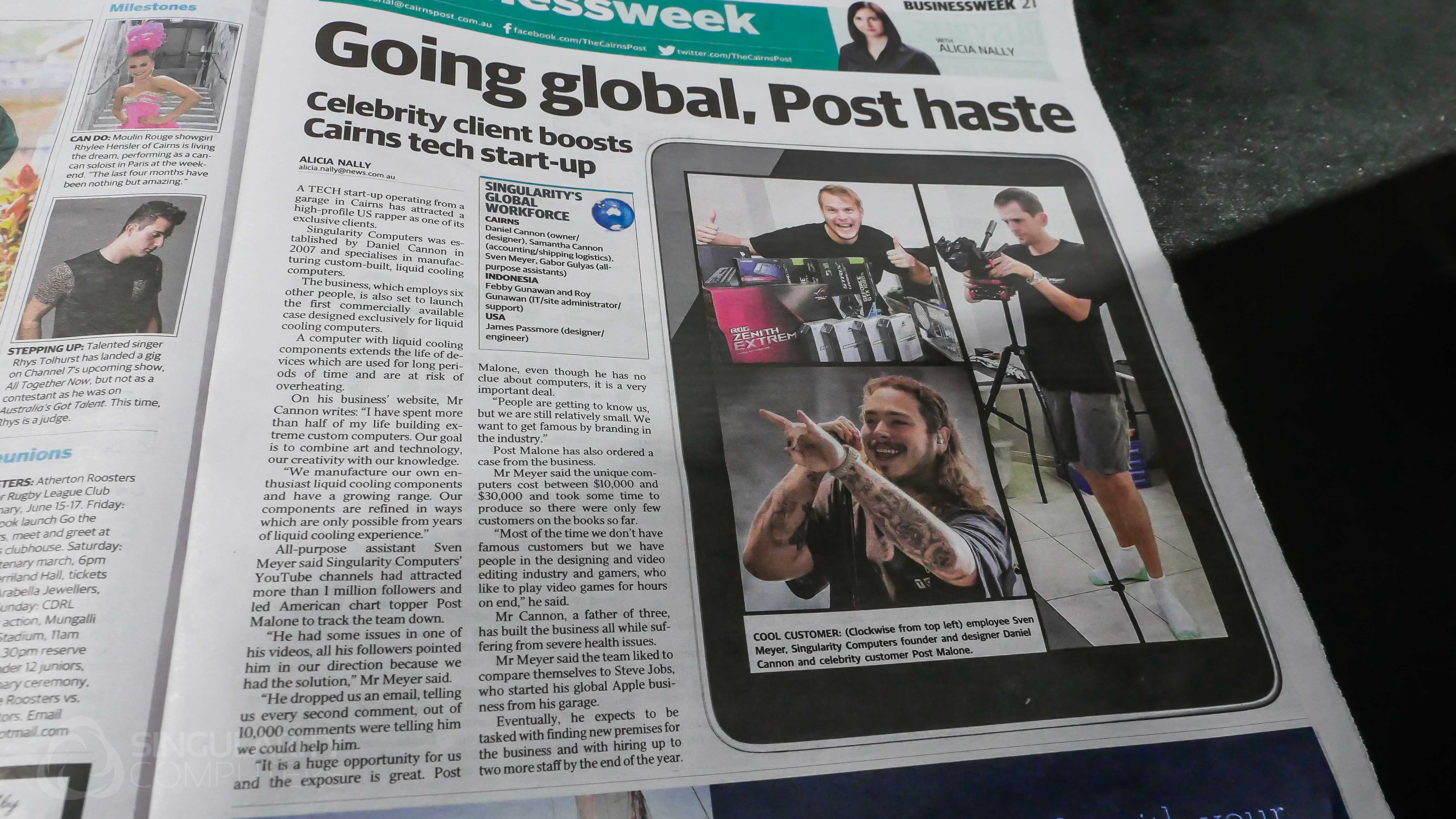 If you’ve ever worked for a newspaper, whether as a student journalist or professional, you likely are acutely aware of the need to keep an article within a certain publication space. And if you run long, your editor will require that you trim the article down. But the key is to trim in such a way that it is still accurate.

Clearly Alicia Nally didn’t maintain accuracy, provided the article was accurate to begin with. Her trimming resulted in an article that made it sound like Post Malone sought out Singularity Computers after being directed to them by a lot of comments. And it was actually JayzTwoCents who sought them out. And her failure to maintain accuracy is leading to the implication Singularity Computers is seizing more credit than due for the Post Malone project, when they likely were reserved in what they said.

As of when this article went live, there has yet to be any comment, clarification, correction or retraction published by either Singularity Computers or the Cairns Post, or the article’s author, Alicia Nally. Hopefully such is forthcoming by all parties.

Update (2018-06-20): Singularity Computers issued a statement after pulling all posts related to the article from their website and social media:

It turns out [the article] was not just missing a bunch of facts but half of it was literally made up. Someone from the media spotted one of our team in the hardware store a few weeks ago and started asking him questions. They ended up interviewing him and we told them what we were up to with Jay building a case for the Post Malone build. So they took out half of the story and put up the article the next day without letting us proof read any of it.