Messenger Coffee’s espresso blend has been my go-to for at least the last year to 18 months. Messenger Coffee is in Lenexa, KS, and sold by several local coffee shoppes, including one within walking distance from my apartment. It has a very mellow, smooth taste when blended with milk. In my opinion it’s the perfect blend for lattes, at least of what I’ve tried so far.

Specifically their AK-47 espresso blend. When I saw my local gun range carrying their coffee – ground, not whole bean – I decided to give it a try after looking them up online and discovering their espresso blend. 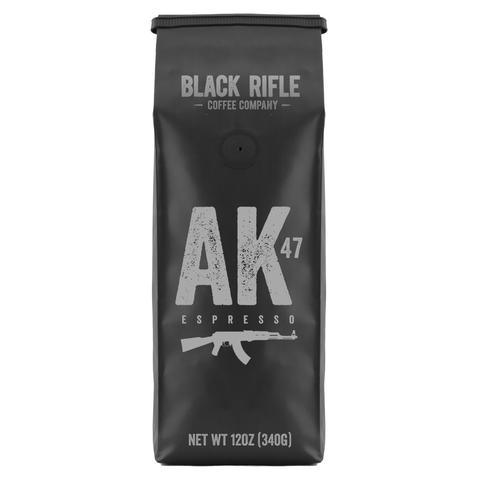 For reference, I have an ECM Technika IV Profi espresso machine with a Compak K-3 grinder – a $3,000 home espresso setup. I’ll say up front this coffee blend was not made with my setup in mind. It overall tasted like it was made for cheaper equipment – such as my De’Longhi EC-155 before I made the upgrades.

And that showed as I reached the end of the bag.

A 12oz bag of beans typically lasts me about 2 weeks. I store the beans in a large Airscape that works great for keeping beans fresh throughout that. And the freshness of the AK-47 blend degraded much faster than I’ve seen. To the point where the shots were coming out significantly faster – with no changes to the grinder – despite coming out a little slow than typical with the first shots I pulled.

With other espresso blends I’ve tried, from both Messenger Coffee and The Roasterie, I’ve never experienced that.

In all seriousness, the double-shot I pulled this morning looked like I’d used ground coffee that’d been sitting out in the portafilter overnight. It pulled fast with little crema. Coffee beans should not be degrading that fast.

But then espresso blends typically aren’t a mix of roast levels. That’s where AK-47 differs heavily. Despite being advertised on their website as a medium blend, AK-47 is actually a mix of both light and dark roasted beans. Yes, you read that right: light and dark roast. Hence why I said earlier this blend was not made for premium equipment. It’d probably work reasonably well with an entry-level machine and grinder, provided you keep your expectations low on coffee flavor or typically flavor your lattes.

Given my experience with different coffee blends over the… six years I’ve been a home barista, the combination of light and dark roasted beans is the only thing that sets AK-47 apart that explains the very fast degradation despite being kept as whole beans in an Airscape. Seriously, that degradation should not have happened. I’m almost tempted to buy another bag to try with vacuum bags to see if the same degradation occurs. There’s a reason most every espresso blend out there uses the same roast level – or they’ll mix medium with dark, not light with dark – and this is the reason.

In a latte, the coffee flavor stands out from the milk instead of being complemented by it. Meaning if I were to have had espresso shots with this blend, it likely would’ve had an overpowering flavor I’d try to rinse away later. But this blend isn’t unique in that particular quality. So on that aspect, AK-47 doesn’t stand out.

But how quickly the beans went stale, combined with the fact it’s not a great blend for lattes when fresh, or even as straight shots for that matter, this is a blend I’ll be avoiding in the future.

Final verdict: 1 out of 5. It doesn’t bring a unique or pleasant flavor to the table, and the beans went stale way too quickly despite being sealed and ground only on demand.