More like a response to a crisis, that being a friend for whom I’ve already told I’d build a new system. So let’s get into this, starting with the parts, a build configuration similar to White Lightning, only different chassis, so different cooling options.

Many I’m sure will complain about the pairing of the 1050 Ti with the Athlon X4.

I originally considered the GTX 1050, but opted for the GTX 1050 Ti when I saw that card as an open box at Micro Center for slightly less than the GTX 1050. Plus it has 4GB compared to 2GB with the GTX 1050. I initially leaned on the GTX 1050 as it doesn’t need an additional power connector.

I wouldn’t consider putting a GTX 1070 or GTX 1080 with this processor. I wouldn’t even consider it for any build into this chassis due to the limited space.

Since I used the EVGA 650 G2 in White Lightning, I considered it a good fit here as well. With its gold rating and quite fan profile, plus smaller overall size, it fits perfectly in the Silverstone GD09, and would be a great selection for any build. Plus it has a 10 year warranty.

If you’re building a budget system from the ground up, I’ve said numerous times in various venues that you should include in that budget a quality power supply before selecting other parts. A quality power supply will set you up well for the future. And at only around 100 USD with a 10 year warranty, you can’t go wrong with this one.

The Cooler Master Hyper TX3 does a pretty good job of keeping the X4 cool as well. It has a lower profile than the famous and popular Hyper 212 EVO, allowing it to fit into the Silverstone GD09 with a few millimeters to spare. And the fan is pretty silent as well, but still had no problem keeping up with the CPU, especially since it has a 120mm intake fan right next to it, and two 80mm exhaust fans behind it.

The GD09 chassis is a great option for building an HTPC or desktop system. Just be sure to select a power supply that allows you to have a 120mm fan on the power supply side of the chassis. And definitely stick with a microATX or miniITX board for this. Full ATX will fit, but it’ll be tight quarters. This is definitely not a chassis for high-end hardware, and there is no room for an AIO. You definitely need to get creative with cable management as well.

In building the system, I picked up a Kingwin KW-PCI2H25, a bracket for mounting 2.5″ drives (SSD or laptop drives) to an expansion slot. Initially I planned to use a 500GB 3.5″ drive as the storage in this system, but couldn’t figure out a way to mount it. In checking prices for 2.5″ drives at Micro Center, I discovered the SSHD for a very good price. But I still needed a way to adequately mount it.

I considered using a 2.5″ to 3.5″ adapter tray and taping it to the top of the power supply. Then I happened to see the Kingwin bracket. So if you’re considering a small form-factor build, keep an eye out for that to see if it might work well for you. 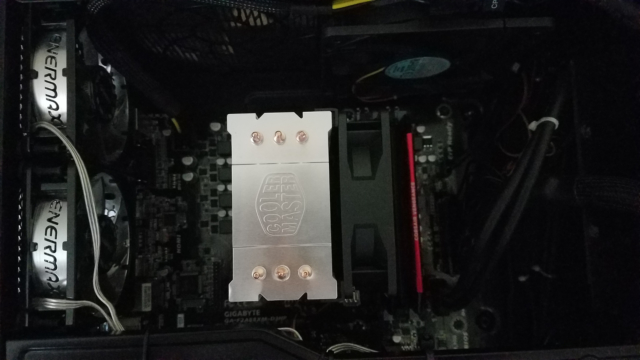 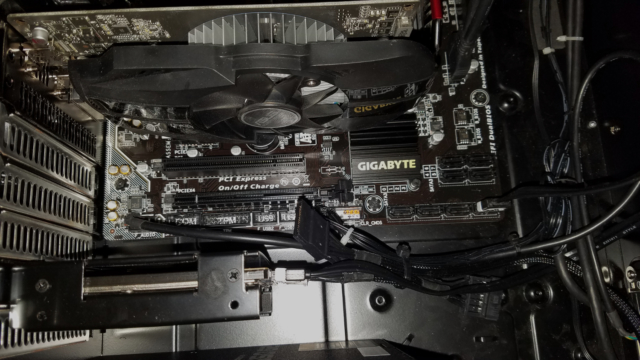 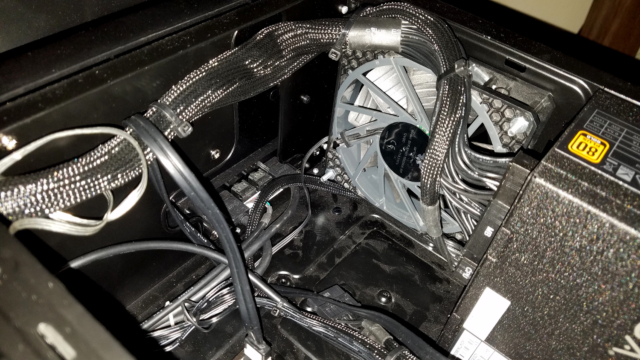 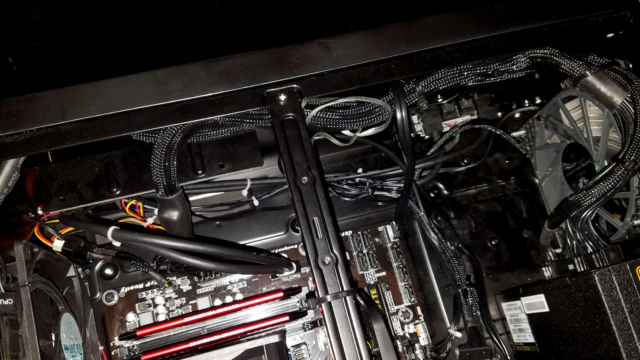 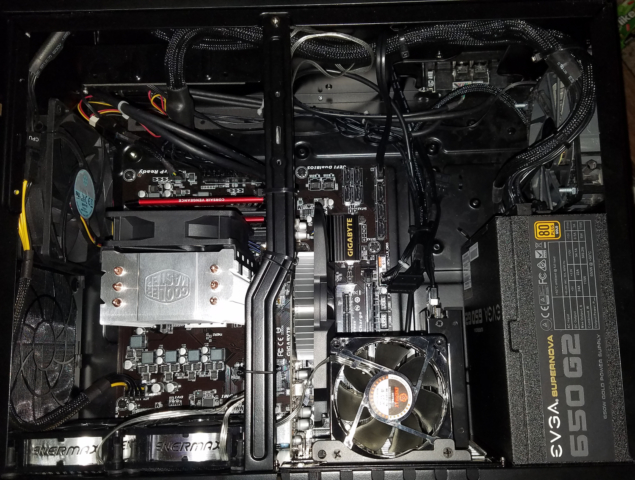 This system is for light duty and mid-tier gaming. The client is a friend who plays World of Warcraft along with  few lighter-end titles. And her current system is on its last legs, not to mention painful when trying to play World of Warcraft.

Her current system is an AMD E-300 APU, using it’s integrated Radeon HD 6310 graphics, I think 4GB RAM, and a 500GB HDD. It’s about identical to the system that White Lightning replaced, the laptop board that HP adapted to make cheap, low-power desktop systems powered by a laptop power brick and no room for expansion beyond swapping out the HDD for an SSD or adding memory.

Silence has been one of my main obsessions lately with building systems, especially with Mira and a quiet cabinet I have in progress, and this was no different. And I’m also glad to see that it’s been a target focus of much of the market for cooling solutions.

The only noticeable noise is on boot when one of the fans is noticeably loud — I want to say it’s the fan on the Hyper TX3. Beyond that there is barely any noise unless you hold your ear next to the chassis. Without the power light or staring at the fans to make sure they’re spinning, there’d be virtually no indicator the system was actually on.

Under load, things are a little different, and the system does start to become noticeable with the CPU fan. I don’t recall noticing any noise from the graphics card fan during stress testing and benchmarks.

Along with the stock 120mm fan that comes with the GD09 and the 92mm fan on the Hyper TX3, I added three (3) Enermax T.B. Silence 80mm fans (product no. UCTB8) and a Bitfenix Spectre Pro 120mm. The Spectre Pro is adjacent to the power supply blowing in. Two of the 80mm fans are behind the CPU, and the remaining is hanging above the expansion cards on an expansion slot fan bracket, all blowing out.

Let’s get into some benchmarks to see how well this system performs. Scores for Mira are in [red]. During benchmarks on its stock cooler with its stock profiles, the graphics card boosted to over 1759 MHz on the core. The CPU boosted to 4.0 GHz.

Heaven is usually pretty good about isolating the GPU. I’ve noted such when I upgraded my personal system, Mira, from an AMD FX-8350 to an Intel i7-5820k while keeping my GTX 770 SLI pair for the initial upgrade. In that upgrade the Heaven scores didn’t budge much — only a few percentage points higher. And a video I found on YouTube showing a Heaven benchmark for the GTX 1050 Ti paired with an i5-6400, the score comes in only about 30 points higher than this score with similar settings.

So at least with regard to Valley and Heaven benchmarks, there isn’t much of a problem pairing the GTX 1050 Ti with the Athlon X4 860k. But to get a better idea of whether this is a decent pairing or not, let’s turn to 3DMark.

To say this system struggled with these benchmarks would be an understatement. The graphics tests for Time Spy averaged at 15 FPS for the first test, shy of 13 FPS for the second. And the CPU test was shy of 6 FPS.

Fire Strike fared better, but there was still some noticeable stutter from the demo. Both graphics tests averaged above 30 FPS, with the first test averaging better than the second. The Physics test averaged at 14 FPS and the CPU test averaged at a little over 10 FPS.

These benchmarks were much nicer to the system, and the system had no problem keeping up with either.

And in comparing these benchmarks with systems with comparable processors, from what I could find, the performance, as represented by benchmark numbers and frame rate comparisons, is very similar when comparing to an i5 or i3 processor.

As such it’s reasonable to pair a GTX 1050 or GTX 1050 Ti with an Athlon X4 860k. Regardless of what you use with the GTX 1050 or 1050 Ti, you’re not getting stellar performance unless you turn down the settings. And pairing it with newer processors (Skylake, Kaby Lake, Haswell-E) doesn’t appear to provide significantly better performance unless it has a higher thread count.

During all of the benchmarks, the GPU never hit 70C, leveling out in the mid-60sC. In part because I took advantage of the horizontal expansion slot at the top of the chassis to mount a fan using an expansion slot mount bracket. It’s just an 80mm fan, but it helps clear hot air away from the graphics card. Additionally there is a 120mm fan adjacent to the power supply to bring air in for the GPU.

With the Hyper TX3 and the fans around it, the CPU never went into the 50sC. Even when running Prime95. So there’s clearly room for overclocking the CPU, but I’m not worrying on that. And this is in part due to the 120mm fan immediately near the CPU and the dual 80mm exhaust fans behind the CPU. The X4 was also boosting to 4.0GHz from its base clock of 3.7GHz during these tests.

So I will almost certainly be using the Hyper TX3 in future builds, where it’ll fit.

Compared to her existing system, this is a significant improvement. She’s getting a processor that supports dual-channel memory, has twice as many cores and a significantly higher clock speed. And the graphics performance is like night and day.

Crisis should be able to power anything she does without difficulty. Unless she opens a bazillion tabs in Firefox or Chrome. The GTX 1050 Ti goes well here, too, and it’ll provide very good performance for World of Warcraft.

This system could likely handle some modern titles as well with the settings turned well down, since even with higher-end processors the GTX 1050 Ti is still not able to perform nearly as well as even the GTX 1070. From what I could find it does outpace the RX 460 while comparing to the RX 470 on performance, but having much lesser power requirements. So I might trade the RX 470 in White Lightning for a GTX 1050 Ti. But since I’m planning to set up White Lightning as a Ryzen system later this year, that’ll likely wait.