This was a relatively quick project I’d been wanting to do for a while. I have a small table next to the couch that faces my television in my entertainment room. When I work from home, I typically sit on the couch and use that table. For powering my work laptop, my only option was to run the power cable to a wall outlet or to the entertainment center. The couch and table are in the middle of the room.

So I had an idea in mind to make a power outlet for that table. That way I could plug in my work laptop without having to run the cable. The couch itself is immediately in front of the tables where mine and my wife’s computers sit. So the power cable would run under the couch and behind to reach one of the surge suppressors. 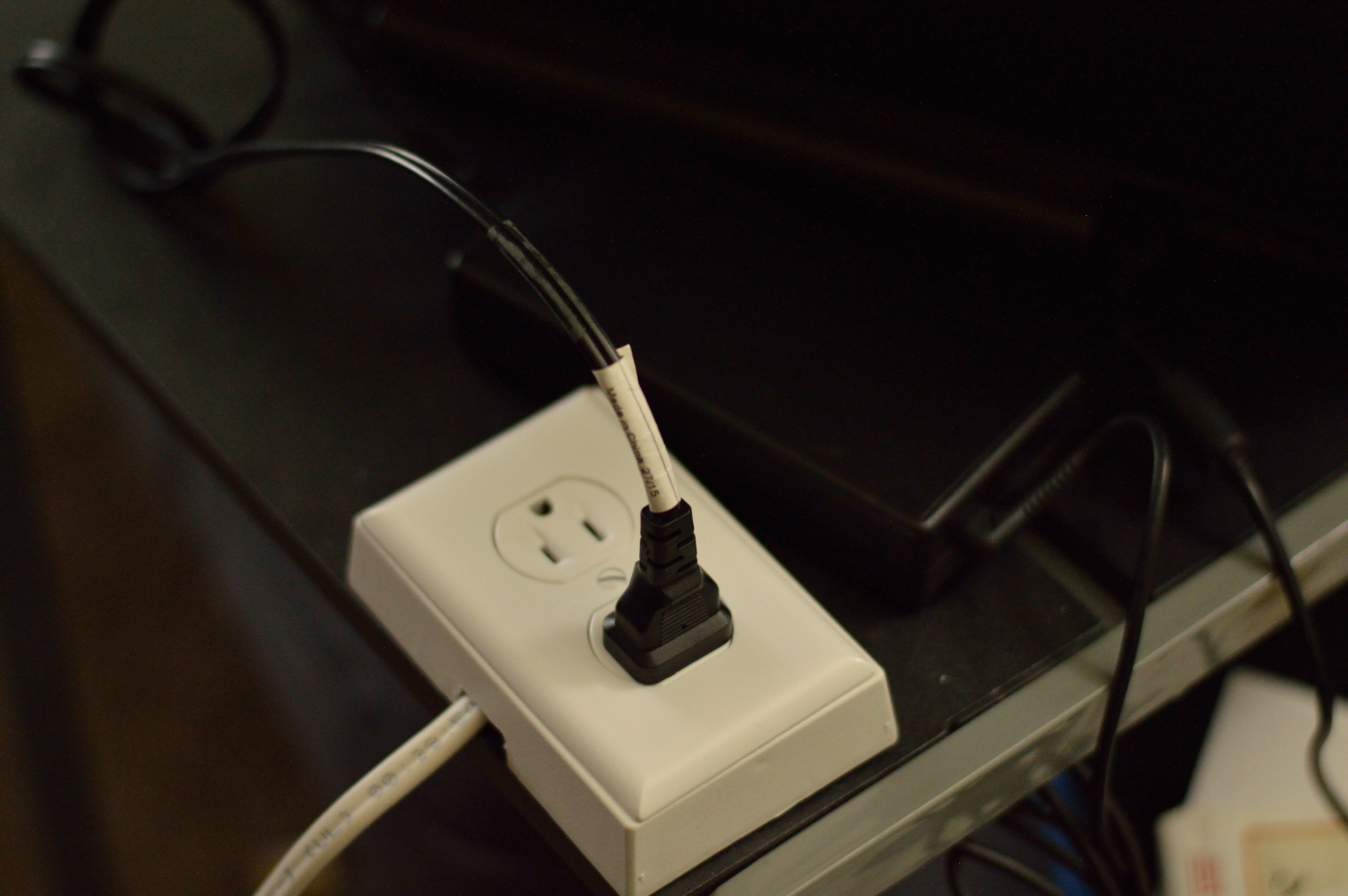 Simple enough. Here’s the parts list for what I used:

And then to hold it to the table, I just used 3M VHB double-sided tape.

The NMW2-D is a surface mount box with a slim profile, so it doesn’t stand up far from the table – only about 1.25″. And it’s serving as a glorified extension cable, allowing me to power my laptop while working, and also allowing us to use USB charging plugs for charging devices and portable chargers as well. I’m already planning to change out the outlet for one that has USB plugs.

It’s also simple and inexpensive. Everything altogether cost about 25 USD plus tax for my setup, everything coming from Home Depot, only because I paid a little extra to get a right-angle 5-15P plug. So you can save a few dollars going with a straight plug if you don’t need the right-angle.

So why do this? It’s a quick project to add power plugs in a useful spot where a power strip or something similar wouldn’t make sense. And if you’re new to wiring up power outlets – which I was – then it’s a quick learning project as well: black to brass, white to silver, and exposed or green to green. And that’s true on both the plug and outlet. It should work fine so long as you keep the color coding straight and secure everything in both the plug and outlet. If you fry something or trip a circuit breaker while testing this, you didn’t wire up the outlet properly. So check everything after verifying you don’t need a fire extinguisher.

At the same time, this served as a quick proof of concept. As I’m considering this as a new way of powering my home entertainment center to reduce some of the wiring bulk.

Unfortunately some of that is just… unavoidable – the A/V cables and network cables in particular (I don’t want to change everything over to wireless). But the power delivery can be split by daisy-chaining outlets in whatever configuration you think will best cover everything. A single-gang outlet per shelf, or two-gang outlets every several shelves. Or a combination thereof.

This will leave just one plug running to the surge suppressor. Making it trivial to swap that out for a UPS later. The A/V receiver and television won’t be plugged into the chain of outlets.

Overall, it’s a simple project that simplified things just a little bit in our entertainment room. And it’s already proven its worth when I worked from home a few days after making this outlet. The picture above is from that morning. Next up is to create something similar for an RJ45 cable after swapping the outlet for one with USB ports.